As they say, "All good things must come to an end" and so it is with this blog. (I'm taking the liberty of calling it "good.")

Kevin arrived at Champaign's Willard Airport a little after 8:00 p.m. Thursday, July 21, 2011. A less active member from Canada, with whom he visited on the airplane, took the following picture of Kevin and his welcome-home committee. 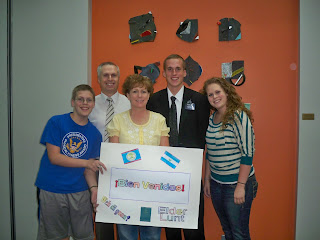 Seth did most of the work on the sign which included the flags and languages of both countries in which Kevin served.

Kevin had a connection in Dallas which allowed Sarah and her family to visit with him about 15 minutes between clearing customs and boarding his next flight. Grace let him hold her without crying which is a little unusual, based on my experience. He was grateful for the cookies and lunch/dinner money they provided to him.

I wanted to not have his release be different than those of other returned missionaries and their families so it didn't end up happening until about 6:30 the following evening. That meant he dressed and behaved like a missionary for one more day. During that day he indicated that he really didn't have a desire to dress in "street clothes", get on Facebook, etc. In fact, he wasn't all that anxious to be released.

I have enjoyed feeling his spirit, learning more about his experiences, and speaking Spanish with him. He was able to participate in some of Deanna's wedding celebration as we had her open house here last night. Melanie and her family were nice enough to drive up for both occasions.

Kevin's mission has been a real blessing to me and I am most pleased to call him my son.