Our first three photos of this week relate mostly to the Chamul family. 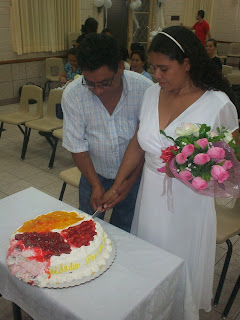 The couple needed to get married so that he could get baptized. I'm not sure exactly how much Kevin did to facilitate the wedding and the related celebration but he seems to have played some role.

Having been married, Brother Chamul could get baptized. He is pictured here with another couple that was married the previous Sunday and baptized on the same day. Again, Kevin's message seems to indicate he played a role in the planning and carrying off of the wedding. Maybe a career as a wedding planner is in his future. ;-) Evidently, the other man is named Paco. He is almost as tall as Kevin and is a former professional wrestler. Kevin had a moment of panic when it came time to lift Paco out of the water but it worked out. Kevin's companion didn't fare so well in baptizing Paco's wife, who is tall and pregnant. I guess it took him three tries.

The following picture was taken at a Family Home Evening Kevin and his companion held with the Chamul family. 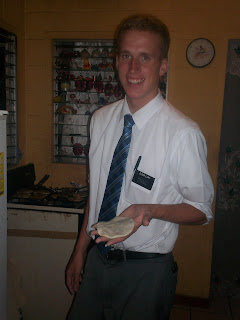 Here's a surprise - they made papusas. Kevin will miss those.
We have known for some time that Kevin would return home before the El Salvador temple would be dedicated. 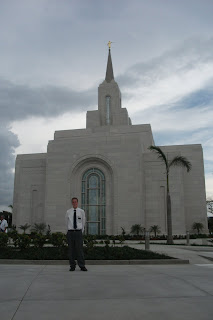 We are glad that he at least could attend the open house with the ward in which he is serving. Here is a quote from his letter. "There were lots of original paintings and one of my favorites was at the entrance with Jesus Christ with two little girls holding on to his robe, one was Nephite and one was Lamanite." He was grateful to be back in the temple after almost two years of not having that opportunity.

I left this picture for last as I wanted all my readers to know that Kevin can do things with machetes other than decorate them and give them to the mission president. 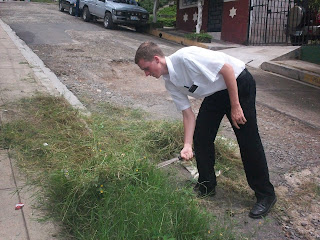 Evidently, they provided service to a member by helping cut their grass.

Here is the last section from Kevin's recent letter. "Sunday was my last fast Sunday in the mission and I went to bear my testimony. It is crazy how fast time flies. Afterwards the young men's president asked me to talk with the young men about the mission and get them excited to go. Like they say these really are the best two years. I am grateful that I have this opportunity to be able to help other come unto Christ. I know that God lives and loves us. I know that Jesus Christ is our savior and I am eternally grateful for the atonement. I know that this is Christ's Church and that we are lead by a modern day prophet. I know that the Book of Mormon is the word of God."
Posted by Ned at 3:45 PM